Ezra’s first day of school was on 27 June (Tuesday) as it was a public holiday on Monday. I took leave that week not just because it was a huge milestone for us, but because parents were asked to sit in for the first three days – one parent per child, that is.

I turned out to be the only father in Ezra’s class; his six classmates were accompanied by their mothers. This is the first intake for the new Playgroup programme, so there are only seven children in the class (five boys and two girls). Interestingly, most of the kids were born in the later part of 2015.

Throughout the three hours, I kept a distance from Ezra and watched him from the back of the class, occasionally taking photographs and videos to update Ezra’s mummy and grandparents.

It surprised me during ‘snack time’ to see that Ezra was able to self-feed and finish the small portion of porridge he was given. At home, Ezra hardly self-feeds as it is less messy and quicker for us to feed him his meals.

The children also get to eat fresh fruits, and it is a system where every child brings a fruit on the first day of each week and the school cook will portion it out for the week. Recommended fruits include apples, pears, oranges and bananas.

Activities on the first day of school included water play, colouring and an indoor playground. 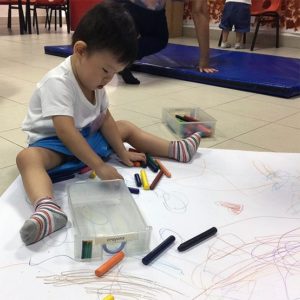 On the second day, Ezra was introduced to homemade play dough – he had fun using shape cutters and rolling pins. During the music and movement segment, Ezra enjoyed playing with finger puppets and small musical instruments, and danced along to songs.

It was heartwarming to see Ezra participating in activities and interacting with his peers and teachers. I was proud of my son for being the most enthusiastic and independent child in class. Ezra also seemed to know that his classmates needed time to adjust to the new environment – he was generous with hugs and took the initiative to hold his classmates’ hands, to the other parents’ amusement!

On 30 June (Friday) parents dropped off the Playgroup kids at the school gate, and the teachers led the kids into the hall for assembly. I had no idea how Ezra would react and I was prepared to deal with separation anxiety. However, Ezra was so excited to go to school that he merely waved goodbye to me and happily ran into the assembly hall!

1) Be confident.
If I were to appear anxious or unsure about leaving Ezra, he might pick up on that and actually wonder if there is something to worry about.

2) Be consistent.
I say goodbye to Ezra before leaving, instead of distracting him and then sneaking off – this might cause Ezra to panic later, making subsequent drop-offs more difficult. Ezra’s teachers are consistent in greeting each child upon arrival, to make the children feel welcome and to help them ease into school.

3) Be punctual.
This is a no-brainer, but it is better for Ezra to enter the assembly hall with the other children than to arrive only when his peers have already settled into the classroom activities.

And that was it; week one of school, done and dusted! 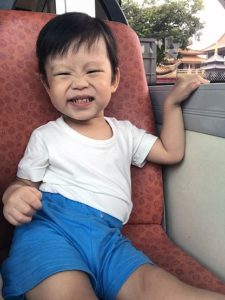