How we fell in love

It’s been 6 years since a girl who never listened to the radio as a staple crossed my path 🙂 I have been very lucky for most parts of my life, but LUCK had a greater and more interesting meaning the moment I realised that I was holding her hand for the first time 6 years ago.

She was never an avid listener of radio, and the way fate works is kinda cool 🙂 I never understood what fate really was… Not until now 😉

So Adam Lambert had a promo back then and it was his first time in SG, and I remembered the mayhem all around Singapore 🙂 the craze that was created around glamberts amazed me so much that i had to do a video for his arrival at the airport.

I remember during one of the weeks on the night show, we were giving away Adam Lambert autographed posters via SMS, Twitter and FB. Glamberts went crazy trying their best to win something. She was one of them. Cos she was told there was a weird person she saw at the airport was giving cool stuff away on radio. She tuned in it for the first time.

The contest ran for that one week. Monday passed, Tuesday came, Wednesday got knocked out in a flash, Thursday faded away… She didn’t win. Hopes were lost, and she didn’t tune in on Friday cos of exams. BUT on Friday, it was a twitter contest. And everyone was frantically waiting for a DM back from me. At 1.12am her heart skipped a beat 🙂 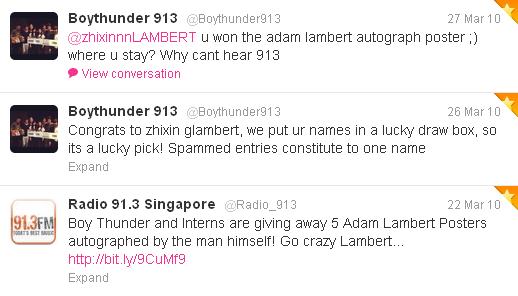 Got her details and told her that someone else would call her back to tell her how she could come and collect her Adam Lambert poster 🙂 2 weeks passed, no one called her… So I received a DM and decided to call her back apologising for the miscomm. Because of that, I decided to personally pass her the poster at her own time. She didn’t had to rush down in the afternoon 🙂

We started chatting on FB. Being alot older, I gave her advice on life in general. I’m quite wise you know! Hahaha… but jokes aside, I was just this very close buddy of hers… and she was… slowly… beginning to make me like her more and more. I was in love, but I didn’t know if it was mutual.

A month after that, she was having her exams… Projects were piling up, so I lent a hand 🙂 as a thank you note, she gave me a bag of brownies 🙂 The wrapper is still on my desk today. Untouched. 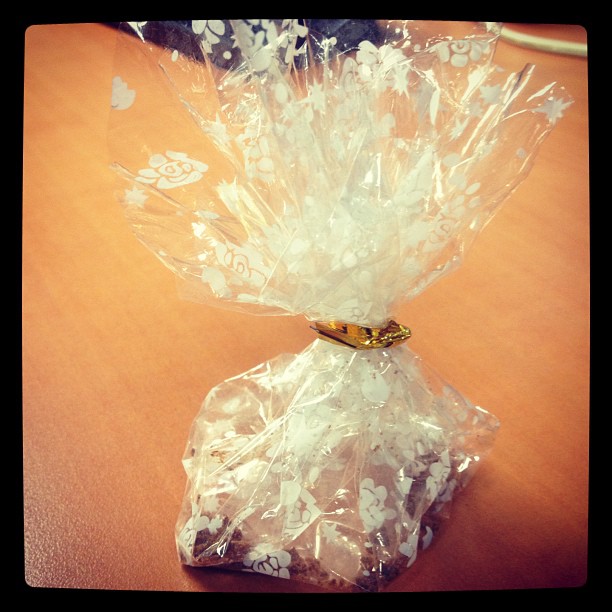 A week passed, and all I thought about was this girl. I kept telling myself that I wanted to see her again, but wouldn’t it be weird? Would I be irritating? I mean I was already given brownies!! What more do I want?! All I could do was to wish her good morning in random SMSes- which was responded almost immediately with a smiley. It felt nice 🙂

Obsession kicked in. I began to stalk her on her blog. (I AM NOT ALL THAT CREEPY OK!) It was silly, but I had to. I saw pictures of her smiling a lot more… It made me happy 🙂 but I wanted to see her again. But I don’t know how 🙁

I noticed on the side bar on the blog stating that she has never eaten Teppanyaki before. I had a plan.

One rainy morning, I texted her asking her if she wanted a lift, cos the rain was too heavy. She agreed. Mission 1 accomplished. When I arrived at her school, it had stopped raining and it was DAMN BLOODY SUNNY LAH!!! Fear of rejection, I uttered a lil prayer. Then I drove up to her. I saw an angel smiling at me 🙂 she came in and said “I’m hungry” … Mission 2 begins…

Drove down to Plaza Sing and pretended to wander around for a dining place… Slowly navigating to the basement floor where a Teppanyaki joint was located. Casually asked if this place was cool for her. We walked in 🙂 Mission 2 accomplished!

Mission 2 led to nights of legit talking on the phone for the first time 😉 those nights never stopped till today 🙂 even when I was in Aussie doing my army reservist, we talked too, even from the depths of the jungle 🙂

I don’t know why but we never actually spoke about going to the movies together… Then a I raked up some courage and bought tix to some sucky movie without telling her, and just walked into the theatre 🙂 she liked my randomness. I liked her presence. It was a fair game 🙂

After weeks of talking on the phone, we were now sitting in a cinema!! It was dark and the movie was SO SUCKY to the max!!! It was called my life in ruins or something like that, about a girl in Greece as a tourguide or whatever… But we pretended to enjoy the movie… At least for me, it was a tough time pretending to be laughing at the supposedly laughable parts… THEN I HELD HER HAND.

I could literally feel my heart thumping like a bunny’s foot! But I could hear hers overpowering mine!! It was a pleasant mix of explosive noises 🙂 she leaned her head on my shoulder. Mission 3 acco……………Wait… Sorry that wasn’t a mission 🙂 it all came natural 😉