Expectations. Every parent has them, even if we try our best not to impose it on our children. And now that Cristan is getting older and his personality is becoming more defined, I’ve come to realise that I might have some mismatched expectations.

All this introspection was triggered by Cristan’s preschool’s Christmas concert last week. I was really looking forward to watching his performance, and hoping that there would be some improvement from last year (when he stood stock still for the entire show). I mean, that shouldn’t be a tough act to top!

But actually, I had already half-suspected that Cristan would still have stage fright. He was initially cast as the “Big Bad Wolf” (in the Three Little Pigs play), but he freaked out during rehearsals, and had to be recast as a “Tree”.

Well, he did a perfect rendition of a “Tree”, because he stood stock still, yet again, for the entire concert. Even when everyone else was already singing Christmas carols with big smiles and animated actions. Even when his friend next to him tried to grab his hand so that they could swing them together to “We Wish You a Merry Christmas”. He refused to join hands and resolutely stood, grim-faced, until the end of the show. 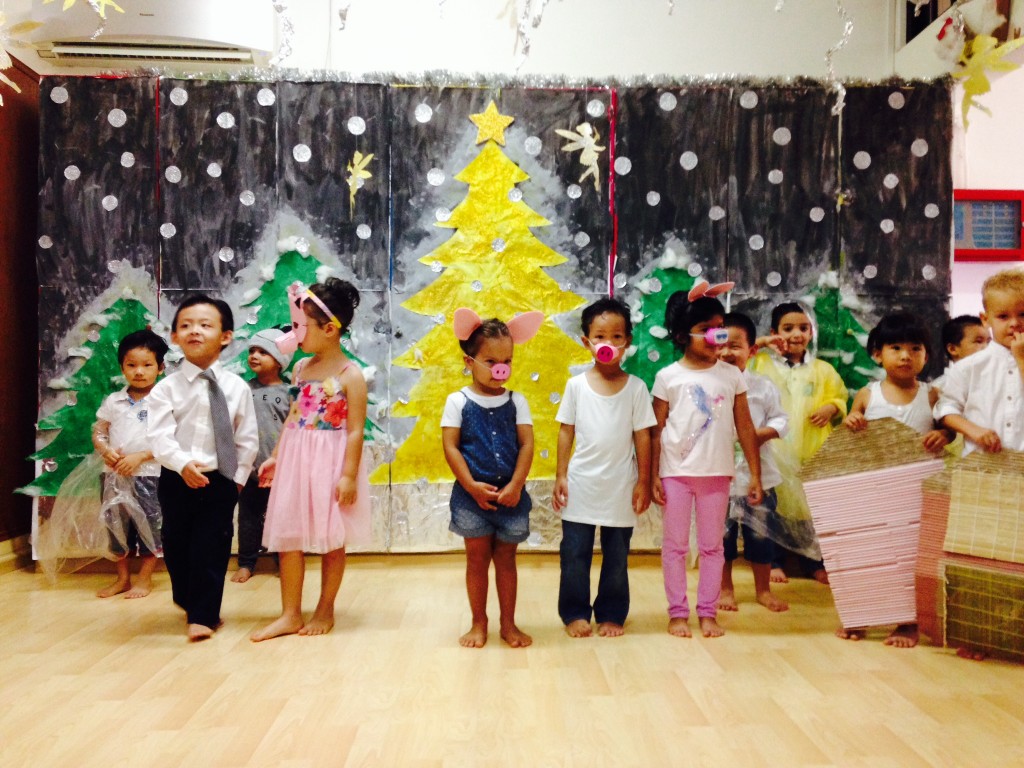 A good, solid tree in the background (extreme left corner). Perfect casting by the teachers!

After the performance, I did my best to encourage him and tell him that I was proud of him. But deep inside, I was…dare I say it…disappointed. He was the only kid who did not perform. Even the newest boy who just joined their class, and did not speak a word of English, smiled and followed the actions to the songs. What was going on here?

Later that morning, over a smoothie, I processed my thoughts together with Tim. Should I be disappointed by his lack of performance? Was I projecting my own hopes and expectations unfairly upon Cristan? While I personally love performing on stage, he probably suffers from severe stage fright and does not enjoy the attention.  He is after all, his own person, and I cannot expect him to be the same as me in personality or behaviour.

As we talked further, we both came to the realisation that he is probably an introvert! Suddenly, a light bulb came on in my mind. Now THAT would explain why he tends to shy away from strangers or large crowds, and is generally cautious when entering a new environment. While he is super cheeky at home, he takes a long time to warm up to new people and surroundings.

This honestly came as a bit of a shock to me – an extrovert! (Tim, on the other hand, was rather smug as he considers himself an introvert as well.) I started to reflect on how I always tried to encourage or even push Cristan to try new things or make new friends when he might not naturally be inclined to do so. All at once, my heart sank as I became aware that I was probably forcing him beyond his comfort zone. Oh the guilt! Am I a bad mommy??

Reading up a little bit more about “extroverts raising introverted kids”, I recognise now that I had unknowingly tried to mould him into a extrovert, based on how I would respond to situations. This impulse is exacerbated by our “extroverted culture” of society which values outgoing and confident personality traits. Doesn’t every parent want their child to be the star, or the most popular and charming kid in school? Well, I suppose some recalibration is in order!

Going forward, I will have to keep reminding myself that when I’m puzzled or even frustrated by Cristan’s behaviour, my rightful role as his mom is to encourage him to be the best that he can be. Not to be a mini-me. At least realising this is in itself a good first step in the right direction!