So. Within a span of 16 hours, the wife has come up with two entries that looked at our parenthood journey so far, as well as another piece that specifically looked at our celebrations for 2013.

It behooves me now to put in a quick entry on what our plans are for, for 2014.

I managed to spend most of 2013 working at home, thanks to an India-based start-up that hired me. However, that didn’t exactly work out as planned, and we amicably parted ways in October. While I enjoyed the freedom of being in between jobs, it was really no fun having to put such a tight rein on my spending habits.

In this respect, 2014 is starting out with a bang for me. I managed to secure a job in a well-respected company, with bosses (yeah, two of them) that impressed me in the two meetings we have had so far. I think this is going to be a good symbiotic relationship that I will have with the company.

Oh, and as a bonus, my new office will be practically next to the wife’s. We plan to take the train to/from work together, so YAY – couple time! 🙂

Holidays. We don’t have much planned yet, but we are constantly looking out for great deals. When the right deal comes along, we grab it like Claire grabs Coco’s toys. Case in point – we’re already booked for a trip to Maldives in September! Three cheers to Tiger Airways’ promo fares to this beautiful destination that we’ve visited practically every year since we started dating!

We will also probably start Coco on swimming lessons, maybe in the later part of the year. Claire? We don’t know yet. Swimming is also likely, but let’s see when she starts walking, eh?

We have been staying with Yi Lin’s parents for about 3 years now, after selling our HDB flat at close-to-peak prices. However, as the market gets flooded with supply and the volume of property transactions slow down, we are now scurrying to get our finances in order, so as to purchase a home for ourselves. Don’t get me wrong – staying with the in-laws is great. We get a lot (a lot, a lot, a lot, alot-alot-alotalotalotalot) of help in caring for the kids. But I just think that it’s time that we also prepare a nest of our own.

This is probably going suck up all our finances for this year.

Every year, the good people who manage Marina Bay will set up booths all over Singapore, and urge the public to pen their wishes for the new year onto big white balls called Wishing Spheres. These Wishing Spheres are then tossed into Marina Bay because the Bay has some serious magic mojo in making wishes come true. So says the government, so it must be true.

Because two is not yet a crowd.

Yeah, alright… let’s start planning for it. We’ll time it so that the Maldives trip will be babymoon no. 3.

Oh, and because $300 worth of milk powder is always handy… 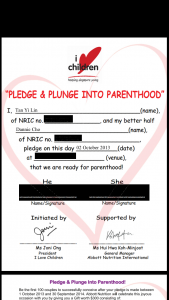 Sign up for this! You have nothing to lose, and powder to gain!

Filed under : Planning For Baby