I love being a mum to two girls. 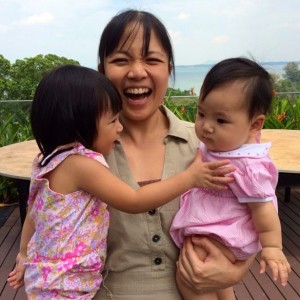 I love my girls!

I’ve been wanting to put in this entry since Claire arrived in April. Friends and readers have been asking what it’s like to have two daughters and how Coco has been taking to her little sister.

I procrastinated for so long because I didn’t know what to write back then. I mean, Claire was just a blur-looking newborn who fed, slept, pooped and cried, and Coco was okaaaaay with her younger sister and that was about it.

On the days that they were born…

Now that Claire’s turned 6 months old, I think that it’s finally a good time to write about these two tiny sisters and the relationship between them. 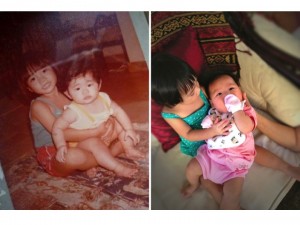 When Claire was born, people kept telling me how much she looked like Coco, but I just couldn’t see the similarity! Is it the same for all mothers – that their offspring are clearly different from one another, even though they look the same to everyone else?

However, looking back on and comparing some of the photos taken of both the girls during their first month, I have to admit that there was a pretty strong resemblance between them.

They both have the same odd habit of rubbing their earlobes while drifting off to sleep. 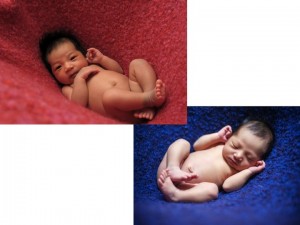 Coco smiled a lot in her sleep. Less so for Claire, but when we did manage to capture a glimpse of her in mid-nap bliss, she really did look very much like Coco.

People often ask whether Coco is jealous of her little sister.

Thankfully, Coco has been incredibly accepting in this respect. In fact, when we first came home from the hospital with Claire, Coco started doling out all her toys and laying them out for the new baby.

We put this down to her generous nature, as she often shares her snacks with others and offers other kids her toys to play.

Big sister was a leeeetle too enthusiastic about sharing…

In fact, Coco seemed to enjoy the company of her little sister. Maybe because she’s rather bossy and Claire was someone new to boss around. It’s not often that someone as tiny as Coco gets to lord over her companions! 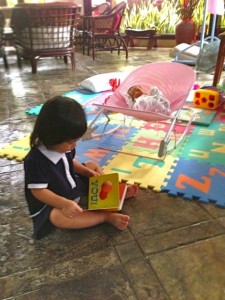 Coco and her captive audience 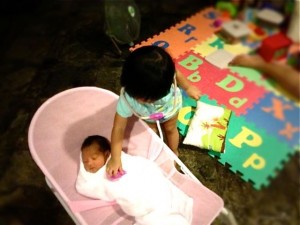 Miss Polly had a dolly…

Claire, thankfully, was a very cool and collected baby, who had no objections to being on the receiving end of her big sister’s affections.

A basket on her head? Just another day in the life of Claire…

How about a frog, for a change?

That said, I think Claire soon started to realise that too much attention from Coco may not be a good thing…

… and started hatching some plans to learn how to hold her own ground when big sister’s around.

“Just wait till I grow bigger, I tell ya, you just wait…”

All in all, Coco has been immensely sweet and caring towards Claire. When we go visiting with the girls and pretend to want to leave Claire behind, Coco refuses to leave without her sister and orders, “Mummy!! Carry Claire!!” She tells me to breastfeed Claire, shoving Claire’s head into my chest and demands that Claire, “EAT!!!”

We think that it’s because Coco is used to having different caregivers and thus isn’t especially sticky to me, leaving me to tend to Claire’s needs. It could also be due to the small age gap between them (19 months) and Coco just accepted that Claire was here to stay – just like how you wake up one morning and there’s a new toy in the house. It also helps immensely that Coco loves going to school, so she happily waves goodbye to Claire every morning and goes off to do her “big girl” activities. Also, we make it a point to have lots of one-on-one time with Coco, especially during bath time and just before bed.

Well, all that force-feeding by her big sister worked really well. 5 months later, Claire has blossomed into a strong, chubby baby, measuring in at the 75th percentile for weight. It’s hard to believe that this was the same grossly underweight 3rd-percentile foetus that caused me endless worry about her health throughout a good part of my pregnancy.

In contrast, Coco is a featherweight, barely hitting the 10th percentile on the growth chart. She seems to have realised that Claire is getting a lot more active and alert and is now a threat to her and her possessions, such as her incredibly ornate high chair, and voices her objection when asked to share. 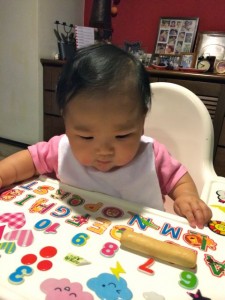 I don’t blame Coco, really. Claire loves to eat and has no qualms about putting EVERYTHING in her mouth, so stuff gets pretty yucky – covered in copious amounts of drool. To be honest, I wouldn’t let Claire get her plump little hands – and mouth – on my belongings either. 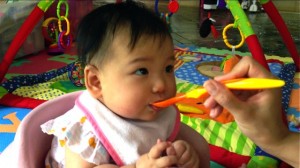 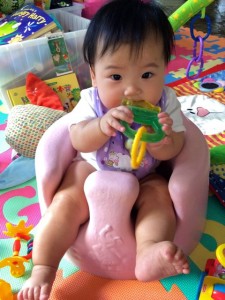 That said, the girls do generally get along well. At least for now. It’s really sweet how Claire has her eyes glued on Coco and her every move. She gets visibly excited whenever Coco’s around and keeps trying to keep up with Coco and get close enough to touch her.

It’s clear that the sisters have vastly different characters.

Coco is the joker – cheeky, playful and always up to no good. She’s always brimming with energy and exuberance, often yelling at the top of her voice and jumping all over the place. She’s also pretty fearless and wants to do whatever we’re doing. 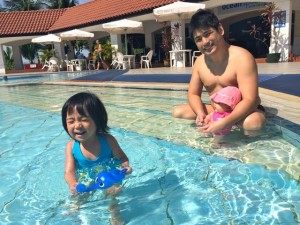 Guess which one loves the water… 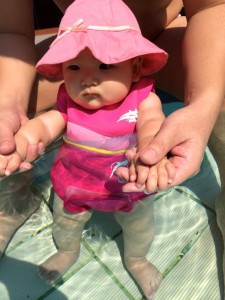 … and guess who doesn’t.

Claire, on the other hand, is more apprehensive and cautious. The tinniest noises startle her and she practically jumps out of her skin whenever Coco shouts, “Peekaboo!” She’s also the more serious of the two, but lately, we’ve been getting more and more smiles out of our solemn little snake 🙂

I can look happy too!

No matter how different they are in character, they have one thing in common: they’re both Daddy’s girls. 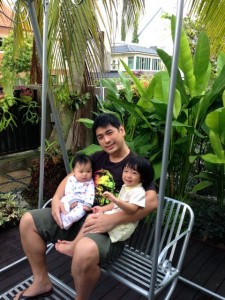 With his precious Cho Colette and Claire

It’s been wonderful having two little girls in the house.

Here’s to more great days ahead with our two little Dictators In Pink.

Thanks all. Yes, it’s really interesting to see how they grow on each other and how the dynamics of the sibling relationship are playing out.

I’m reading The Sibling Effect now and it’s been a rather fascinating read. Will share some insights when I’m done!

Aww… Sweetness.. I have 2 girls myself and age gap is only 22 months. So I totally understand every word you said. My 1st firstborn is also as easy going as Colette and the 2nd one is a little more fussy. But the way the sisters interact. I would NOT change a thing!

Keep your stories coming along, lovely to see / feel that someone out there has a similar experience as well.

Kiss / Hugs your gals for me! xoxo

Aww, sweetness! Claire doesn’t look so much like Coco now – fairer and a lot chubbier! I love watching my boys when they play together too – I think that’s the best thing we can give them: a sibling 🙂

such sweet sisters! its always nice and heart-warming to know and see the elder accepting the younger one.. with such sweetness and taking good care too .. 🙂

Awww, they are so lovely. The photos of you & sister + Coco & Claire are so similar.

I didn’t realize they were only 19 months apart. Good gap to grow up together!

I love both my girls too! Both of them are Daddy’s girls and have the ability to cause aching arms too!Both girls love planting kisses on each other. I hope Samantha will continue to love her little sister when the little one starts to reach for her toys. 🙂