What do you appreciate?

When Ash was first born, I remember looking at him for the longest time. If there were really such a thing called love at first sight, I guess it would have summed up my emotion quite aptly. The same thing happened when Ayd was born, I would just sit and stare at him in awe. As for Ale, let’s just say I fell deeply into her eyes. 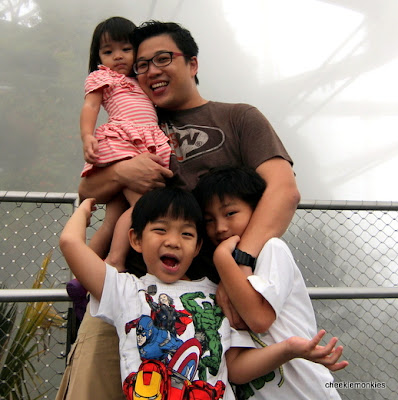 It is hard to put such moments into words, isn’t it? Naturally it would come as the best feeling in the world. And as they grew older, that lengthy gaze has morphed into something deeper. I would be able to see inside them – their inherent qualities and all that is good and true about them. Whether is it their creativity, kindness, selflessness, sharing, or thoughtfulness, these traits define them as an unique individual.

But as my monkies got older – particularly Ash & Ayd – I find myself getting a lot of reminders about what is ‘wrong’ with them be it too much rough playing, reluctance in learning spelling or being plain rude. And I am absolutely guilty in coming down hard on them, and reminding them of these wrongs.

But I was wrong myself as well, and luckily the wifey knocked some sense into me. She reminded me that by focusing on their ‘wrongs’, it merely sets the stage for them as they get older to go find ways to feel loved and appreciated and to do things to gain attention, affection, acceptance, and appreciation instead of just being themselves.

Perhaps if I appreciate the inherent qualities in them a little more often, hopefully they would realise that they will just be as happy being themselves. So the next time when someone calls them names and say that they are ugly or stupid, they would be brave enough to question them instead of just accepting them as the truth.

And what better way to honour your child and to establish a sense of self-worth than to give them appreciations. Appreciations can be kept very simple and is a time for them to be reminded of what is true about them regardless of what they do. One good way would be letting them know how much you appreciate them for being lovable, creative, kind, selfless and thoughtful just before they go to bed at night. And here is another method I found online – when they are old enough to read, you can write a few of their traits down on a piece of paper and have them read aloud to themselves. Hearing themselves remind themselves can sometimes resonate even deeper.

We live in a world where social media is part and parcel of our lives. And it will definitely be one of the more prominent platforms where our kids will be bombarded with loads of false things about themselves as they are growing up. So a simple appreciation regularly to remind our kids about what is true about them surely goes a long way. And for that, I have to thank my wifey for the reminder.